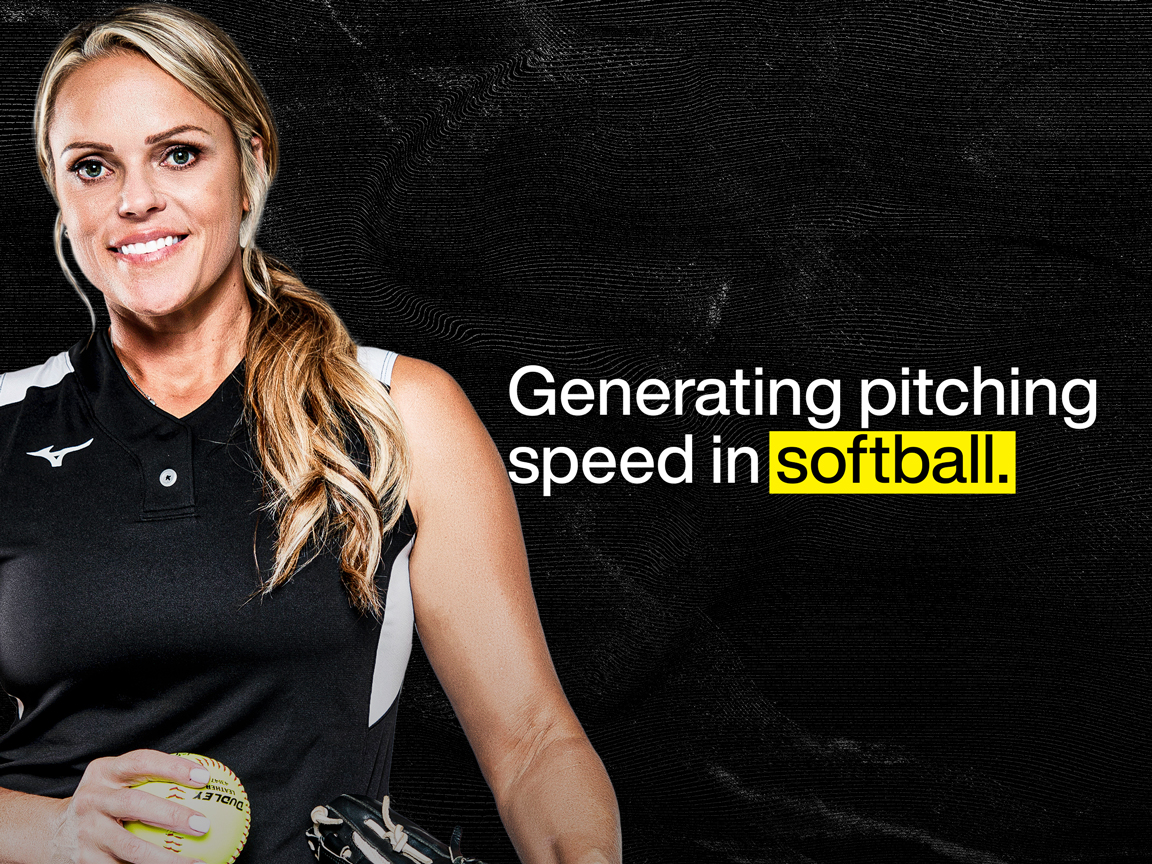 Jenny Finch gives away the secrets to her famous fastball.

Despite being the first pitch every softball player learns, few athletes truly master the fastball.

There is a tendency to focus on breaking pitches once pitching fundamentals have been learned.

And while adding to your arsenal as a pitcher is important: it should never come at the expense of maxing out your ability to generate speed.

The challenge is, there are so many things a pitcher needs to work on, that it’s hard to know how to incorporate dedicated speed work into a practice routine.

Fortunately, we recently had the opportunity to ask Jenny Finch—one of the greatest softball pitchers of all time—this exact question.

During her playing career, Jennie had one of the most feared fastballs in the game.

A simple Google search will bring up some of Finch’s victims from this time. Seeing as he’s a humble guy and a fellow Versus athlete—we’re sure MLB legend Albert Pujols won’t mind us including this clip of Finch striking him out.

This article is best used as a continuation of Jennie’s previous training sessions on pitching. We’ll cover the basics of generating speed, then go over some drills that can be used in practice.

Just to give you an idea of the extra content available to subscribers: Jennie Finch currently has dedicated sessions on throwing the drop ball, changeup, and riseball, plus a video on the power of your personal brand. This content is currently not available for anyone other than Versus subscribers.

Speed Starts From the Ground

The first point Finch makes is that to generate speed, a pitcher’s lower half must be “balanced and fully connected to the ground.”

While arm speed is important (more on that shortly), it’s essential to remember that pitching power primarily comes from the ground. “That’s where the magic happens,” Jennie states.

A pitcher begins to generate speed when they push off the mound. This should be an explosive action. Full of force—like this.

That step off—while balanced and connected to the ground—creates energy that can be transferred to the ball.

But this power can only be transmitted when the pitcher comes to a complete stop with their front foot.

“We have to resist against our own force and power to send energy to the ball.”

Jennie explains. “It’s like a gymnast sticking her landing—it’s hard! Your abs, core, everything goes into sticking it to the ground”

Finch describes this as the most difficult element for young pitchers. Stating, “Our bodies are telling us just to give in. But we have to resist against our own force and power that we’re pushing off the mound.”

The key is to resist giving in and walking through at the end of your pitch. Anything other than a complete stop will result in a major loss of the energy, speed, and spin that could be transferred to the ball.

Finch’s cues are: “Have a firm front side to stick off of. Pull that wrist snap through. And drive speed into the ball.”

Here she is in action.

Jennie loves the flamingo drill to practice driving off your front foot.

To start, stand on one leg.

Then practice getting loaded and pushing off—resisting with your front foot when you land.

When doing this drill, focus on:

On the finish, make sure to keep your throwing arm in the 9 o’clock position. Plus really focus on feeling that front foot on the ground.

The goal is to practice driving off the foot just as you land, as that’s what sends power back to the ball.

Finch describes the feeling as “almost like popping a wheelie.” Because upon coming to a stop, weight travels from the front foot all the way back to the ball.

Remember: “Have a firm, solid front foot. Then stick it and spin it off that front side,” Jennie states.

“The faster your arm goes—the faster the ball is going to go.”

Despite her focus on the lower body so far, Jennie believes that arm speed is crucial to generating pitching speed.

To get the most power out of her arm circle as possible, Finch starts her windup with “racing dive.”

She believes that starting with her throwing arm in the 9 o’clock position provides more power than just coming out of the glove—like this.

Putting It All Together

Before we move on to one final drill for generating pitching speed—let’s put all the steps together.

Get good extension from the 9 o’clock position with your racing dive.

As you power off the mound, remember, “arm speed is ball speed.”

Using a firm front foot, come to a complete stop, and transfer all your momentum and energy to the ball.

Jennie uses long toss to work on generating power and speed (both overhand and underhand).

Her usual drill is to start on the mound, throw a pitch, then take two steps back. Another pitch, two more steps back. Repeat until you get to second base. Then keep going back as far as you can.

When you’re maxed out, reverse the process to come back in.

Once you’re back at the mound—finish up by throwing five or six pitches all out.

Try to maintain all that extra power from long toss, and combine it with the regular fast twitch movements from the mound. Focus on using every bit of power in your body.

Push It To The Max

Finch finishes the video session with some interesting advice.

“As a young pitcher, I think it’s crucial to push your body to the max”.

She warns against slowing down to try to figure out the release point to throw strikes. “That just means you have to practice harder and try to slow down,” Jennie states. “It’s going to be inconsistent. And while you’re kind of hanging out there, everyone else is going to pass you up.”

It’s easy to get stuck in the complexities of pitching. And while we’re certainly not advocating slacking on technique. Sometimes, when you want to throw fast—less thinking and more doing is the best approach.

Or as Finch puts it at the end of the video,

“Go out there and give everything you have. Drive off that mound. Firm front side. Let it rip. And continue to watch your progress go.”

If you found this article useful, you’re going to love the other video sessions on Versus.

We’ve got heaps more training sessions from Jennie. Or if hitting is your thing—Amanda Lorenz has you covered. We even bought in world-renowned softball coach Tim Walton, to cover practice plans and mindset tips.

You can trial Versus with our free plan. While our standard and premium options give you unlimited video sessions, interactive questions, and input on future course content.

Versus provides access to high-level training and instruction from the world's best athletes and coaches. All at an affordable price. on a digital platform you can access anywhere.