How to Coach Third Base 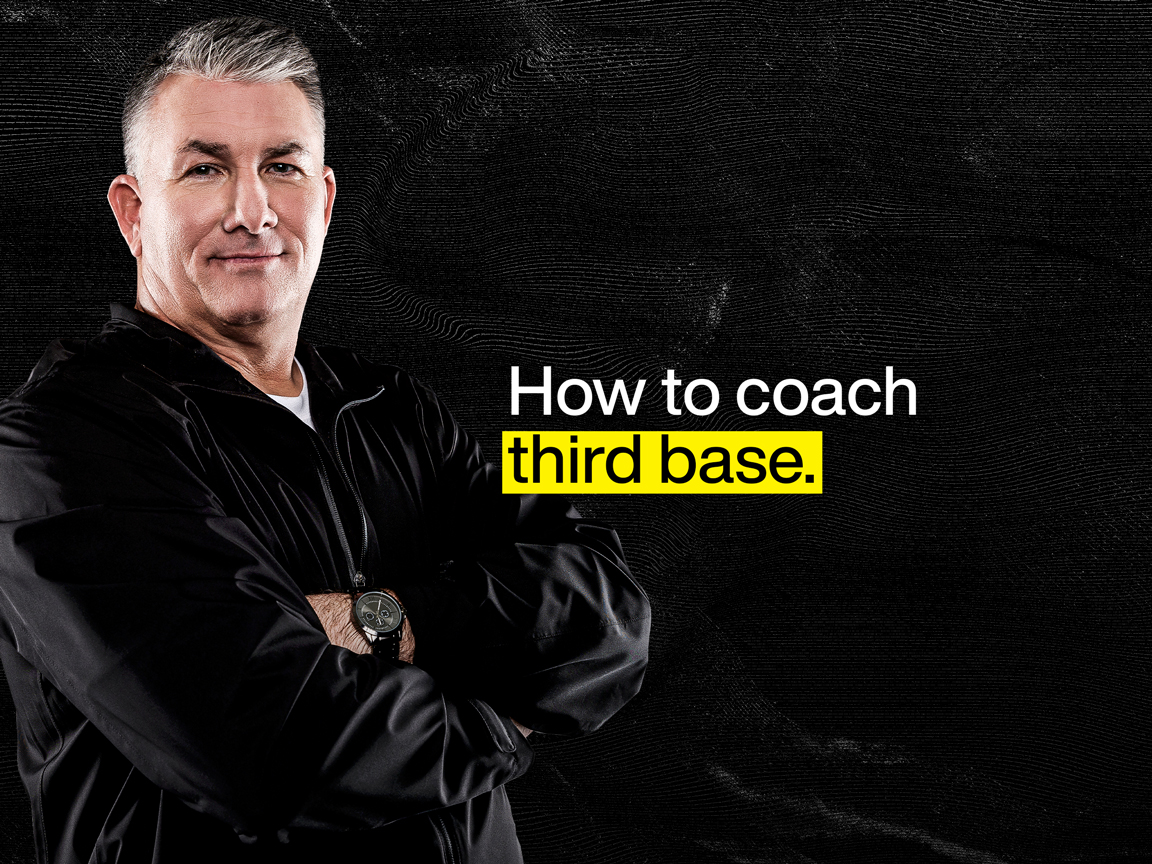 A head coach with over 1000 career wins explains one of the most important roles on the field.

In baseball and softball—the third base coach can win or lose games.

Making the wrong call for baserunners results in unnecessary outs, missed scoring opportunities, and frustration and tension throughout the team.

While we agree that coaching third base is an art—it’s important to remember that every great artist has incredible skill.

The best painters don’t just slap paint on a canvas and hope for the best. A talented movie director doesn’t simply wing it and make it up as they go along.

What great artists and successful third base coaches have in common—are rock-solid foundational skills—and the willingness to utilize intuition to be decisive.

That is where the ‘art’ comes in with coaching third base.

A good coach makes it seem like they can read the future, by always being one step ahead of the competition.

If you’re looking to learn how to coach third base for the first time. Or have been in the role for a while and want to level up. We’ve got something special for you today.

An Artist and a Technician

Tim Walton is one of those rare coaches who blends the art of intuition with technical knowledge—then uses this skill to win games.

He’s the second fastest NCAA coach to rack up 1000 career wins and has received the SEC coach of the year award no less than five times.

Walton has been a head coach in college softball for 17 years, taking eight of his ten teams with the Florida Gators to the Women’s College World Series.

With Tim at the helm, Florida softball has become a national powerhouse. The Gators racked up a Southern-Conference-leading ninth regular season title in 2021 and have won the SEC Regular Season Title five of the last six seasons.

Tim takes a lot of pride in his skill at coaching third base. So we were thrilled to get him in for an exclusive video training session covering exactly how he does it.

We’ll go through the main points from the video in this article—but to hear everything Walton has to say on this topic—head over to Versus and sign up.

Our free plan includes 1 video session and 10 interactive questions from our roster of world-class coaches and elite athletes.

To access the full library of video sessions, including additional interactive questions and exclusive content—check out the standard and premium plans. Both provide affordable access to our innovative digital training platform, to help you get the most out of your unique sporting potential.

Until then, here’s Tim Walton’s guide to coaching third base.

Coaching third base is all about positioning.

To make the right call, the third base coach must be in a position where they can:

Being less than optimally placed for any of these variables dramatically increases the chance of making a bad call. And according to Walton—avoiding errors should be the top concern for a third base coach.

“I’ve seen a lot of third base coaches win games for the team,” he states. “But more lose because they’re in the wrong position.”

No one wants to make an error that costs their team the game. So let’s look at where the third base coach should be positioned in each situation.

With no runners on base, there’s not a whole lot of activity for the third base coach.

Tim acknowledges the coach might be the sign picker. Although he’s not big on picking pitches—finding it can result in being out of position once the ball is in play.

The main thing with no runners on base is to be safely positioned to avoid getting hit by a batted ball. This is usually more of a concern with a right-handed hitter, so adjust accordingly.

Once the ball is in play, the third base coach must constantly be aware of and adjust their position.

With a runner on first (or a ball hit down the right-field line), the coach should be more to the outfield side of third base.

Their job is to be positioned to be seen by the runner as soon as possible. “She needs to be able to pick me up early to bring her to third, or hold her,” explains Walton.

If there’s a runner on second, the coach can’t be even with third base in line of sight of the runner. This is an easy mistake to make, as it’s usually best practice to be as visible to the runner as possible.

The problem is, from that position, the coach can’t see the ball or how the defense is responding.

To properly direct the runner on second—the third base coach needs to be as far down the line toward home plate as possible.

When there’s a runner on third only, the coach can be even with the base and have a close dialogue with the player.

But remember, if there is a runner on first as well, this isn’t possible. You’ll need to shift position further up toward the outfield to be more visible for the runner on first.

With runners on second and third, the third base coach needs to move back down the line closer to the catcher.

In this situation, the coach needs to be positioned so they are visible to both runners—while also being able to see the play unfolding in the outfield.

One of Tim’s mottos that applies here is, “If you’re not early, you’re late.”

In every situation with runners on base, the third base coach has to make a snap decision, then communicate it to the runner without delay.

Any hesitation can result in a wasted opportunity, or worse—an out.

If you struggle with overthinking. Or spending too much time trying to make the ‘right’ decision. Try reminding yourself that a late call is a wrong call.

To be a good third base coach and in game manager—you have to be willing to trust your gut, not second guess yourself, and accept that you will make mistakes.

Next to positioning, communication is the most important skill when coaching third base.

The whole purpose of being in position and reading the play—is so you can quickly and effectively communicate with base runners. This is how third base coaches win games.

With the exception of only having a runner on third, you’ll need to come up with some signals and hand-signs to communicate with your runners.

When he’s coaching third base, Tim has signs to communicate with any base runner, his on-deck batter, the first base coach, and even the first base dugout if he needs to.

Obviously, this isn’t something you can just make up on the day. Being a good third base coach takes advanced preparation and practice with the whole team.

Your base runners should always know where to find you, how you are going to communicate, and your expectations.

Except for adjusting to the play—there should be no surprises or changes to how you coach third base on game day.

Make sure the on-deck batter is ready to communicate when you send a runner to home base.

Particularly if other bases are occupied, you need to efficiently hand the runner over as soon as they leave third base. From then on, it’s the on-deck batter’s job to help them safely score.

Walton’s advice on sliding is simple—“It’s always better to slide than embarrassingly get tagged out because you didn’t slide.”

And sliding isn’t just to save face. “I’ve seen more people get hurt by not sliding than trying to stand up and touch the base,” he claims.

The Most Important Role on the Field

Coaching third base is always going to be one of the more challenging roles in baseball and softball.

Stakes are high. There’s a lot to stay aware of. And if you make a bad call—the responsibility is all on you.

But it’s also one of the more rewarding tasks in the game.

When done right, a good third base coach can positively impact the entire trajectory of a game. That’s why Tim Walton calls it “the most important role on the field.”

To feel the kind of pride and fulfillment Tim gets from coaching third base—take the time to learn the fundamentals.

Work on them with your team in planning and practice sessions, then get out there and utilize them in the game.

Here’s a recap of the three most important points when coaching third base:

If you liked this article, make sure to head over to Versus and sign up for one of our plans.

You can get access to exclusive content from Tim Walton and the rest of our roster on topics like coaching, practice, game strategy, mindset, skills development, and injury prevention.

Our standard and premium plans even let you ask interactive questions through our AI-powered technology—giving you direct access to advice from Versus athletes and coaches.