Mastering the Art of the Riseball 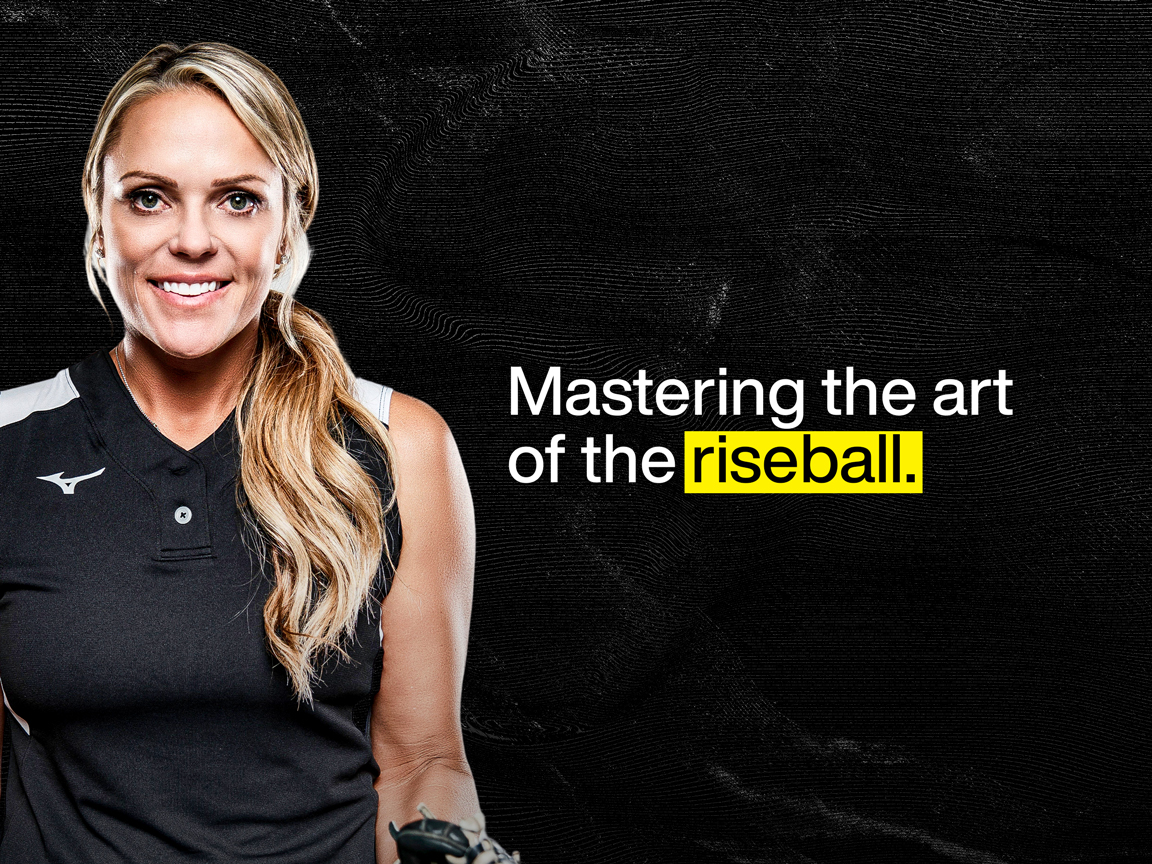 Jennie Finch teaches you how to defy gravity, with the hardest pitch to throw, and hit, in softball.

The riseball is a fearsome pitch.

It comes out looking like a nice straight fastball. Then just as the batter starts to swing—does the seemingly impossible and breaks up and over the bat.

Most hitters will swing and miss. And for those who do manage to make contact, it will likely be a pop-up for an easy catch.

Fortunately for hitters—there are very few pitchers who can consistently execute a good riseball.

A riseball is not a high fastball. It is a pitch that defies gravity by moving upward from a straight trajectory, rather than down.

Making a pitch like this takes skill and dedication. It’s not uncommon for pitchers to work for months, even up to a year, before finding success. Many give up along the way.

But for the pitchers who persevere—the payoff is huge.

Mastering the art of the riseball adds an almost unhittable pitch to your arsenal.

You can utilize it on demand for a strategic out. Plus you will stand out compared to all the pitchers who can’t throw one.

Furthermore, just knowing that you possess this devastating skill keeps hitters constantly off balance and second guessing themselves.

The only problem is finding someone who can teach you how to throw it.

Fortunately, we can help you out with that.

A Recipe for Success

Inducted into the Hall of Fame in 2016, Jennie Finch is one of the most accomplished pitchers to ever play softball.

She made a huge impact on college softball, shattering several NCAA records, including going 32 - 0 her junior season and racking up a whopping 60 consecutive wins. Finch left college softball the career leader in innings pitched, strikeouts, and shutouts, plus was tied for no-hitters.

Jennie was just as dominant in professional softball.

She was named co-pitcher of the year for the Chicago Bandits in 2005. Set the NPF’s season ERA record of 0.11 in 2007. And had multiple no-hitters, perfect games, and extended winning streaks.

To top it all off—Jennie was instrumental in the United States winning gold in the Athens Olympics in 2004, then silver in 2008.

While her playing career is nothing short of astonishing. What makes us most excited to have Jennie for this training session is the fact that she’s also an accomplished coach.

Having access to someone who has struck hitters out with riseballs at the highest level is rare enough. But when that person is also a master coach—that’s a surefire recipe for success.

In this article, we’ll run through the main points from an exclusive video training session we produced with Jennie on mastering the art of the riseball.

While we’ve done our best to translate the content of the session into text—anyone serious about getting to the next level will want to sign up to watch the video as well.

You can access a single session at no cost with a free subscription. While our standard and premium options include unlimited video sessions from our roster of elite athletes and world-class coaches.

Versus subscriptions also enable you to ask interactive questions from your favorite athletes, made possible with our advanced AI-powered technology.

Just imagine, getting stuck working on your riseball and being able to get advice straight from Jennie Finch. Or discussing game strategy with one of the best hitters in professional softball, Amanda Lorenz.

Versus has everything you need to get the most from your unique sporting potential—all on an easy to use app you can access anywhere.

Until then, let's take a look at Jennie Finch’s guide to mastering the art of the riseball.

“The riseball is one of my favorite pitches,” states Jennie, “but it’s probably the hardest pitch to learn.”

It requires strict adherence to proper softball pitching mechanics, while dialing in the variations that give this unique pitch its powerful ability to confuse hitters.

To execute a riseball—you have to get underneath and behind the ball as you throw. You also need to have a firm front side and come to a complete stop.

That’s the only way you can get the high-speed vertical backspin that’s required to get the pitch to defy gravity and break upward. Or as Jenny puts it, “make the ball dance up through the air.”

The riseball is a highly technical pitch with several key components to master. And learning it takes time.

There really are no shortcuts. The ‘secret’ is to master the specifics of the pitch—then get in enough reps so that you can execute it on demand.

If you need to brush up on other areas of pitching, please consider checking out the other sessions in Jennie’s softball pitching course:

Let's start with the grip for the riseball.

Find a ‘C’ along the seams of the ball. Place your middle finger along the bottom part of the C, then tuck your pointer under the top seam.

Alternatively, you can use the “buddy system”, like this.

With either grip, the goal is the same: “I want four seams coming backward at release point,” explains Finch.

“All of my pitches straight out of my windup should look the same,” states Finch.

The point where Jennie starts adjusting for the riseball is right after her standard 9 o’clock position, as shown below.

“That’s when I start turning my wrist and feeling my fingers the way I need them to make the ball break,” says Finch. She describes the wrist motion as “almost like turning a doorknob.”

“Imagine you’re trying to scrape your knuckles along the ground,”

...is another cue she recommends for the riseball.

Crucial points at this part of the pitch are:

Leading with your pinky toward home plate and coming underneath the ball.

You want to keep the pressure firmly on the pointer finger, to execute a powerful wrist snap and spin the ball backward.

You should finish throwing a riseball with the back of your hand towards the catcher, like this.

To help in getting behind and under the pitch, keep your body in a slight backward tilt. You need to “get underneath it, stay back, and pull underneath that ball,” Jennie explains.

Consistent with her advice on every other type of pitch—Jennie is adamant that you need a firm front side to transfer spin and power when throwing a riseball.

Check out how much her back leg is coming off the ground right here after coming to a complete stop.

In other videos, Finch suggests the cue, “Stick it and spin it,” to dial in this point of any breaking pitch.

The magic of the riseball happens in the release, so let's take a closer look at that part of the pitch.

In the video, Jennie reminds us that the riseball should be exactly the same as all your other pitches until you get to the 9 o’clock position at the back of your windup.

“That’s when you’re going to start getting underneath the ball."

Scraping those knuckles along the ground.

Lifting underneath and getting behind the ball.

And creating the 6 o’clock to 12 o’clock [vertical] rotation backward.”

When it comes to release—the key is working on getting it as tight as possible.

The faster the spin, the more the ball is going to break. So really try to focus on a powerful wrist snap and a tight release.

An interesting piece of advice from Finch, is to recognize that when you first start trying to throw the riseball, it’s going to be an angled pitch. “You’re going to feel almost like you’re chucking it up,” she explains.

Some coaches get stuck on this point. Dwelling on the fact that this isn’t a riseball (yet)—it’s a high fastball.

While they are technically right, we prefer Jennie’s focus on iteration vs perfection.

Finch recognizes that no one starts off actually being able to throw a riseball. Even experienced pitchers never get it right away.

The logical approach is to accept it’s going to be an angled pitch to start,“then just work on condensing it and getting tighter and tighter.”

Rather than aiming for perfection—focus on iterating on the following:

To help with the perseverance and dedication needed to learn this unique pitch—remember that you are trying to break the rules of gravity when throwing a riseball.

It’s not normal to throw a ball straight and have it break upward rather than drop down.

The spin on a riseball literally has to be powerful enough to defy gravity. And that's not an easy thing to do.

But the effort and determination are well worth it.

Pitchers who put in the work to master the art of the riseball can throw a near unhittable pitch on demand.

Any hitter going up against a pitcher with a killer riseball will forever be second guessing themselves. Meaning that even when you don’t throw it, having the riseball in your repertoire of pitches will help you get more hitters out.

If you want to master the fundamentals of pitching for softball. Or add any number of other breaking and specialty pitches to your arsenal—sign up for one of our plans now.

Any Versus plan gives you access to our library of exclusive video training sessions. Plus you can utilize our innovative AI-powered technology to ask interactive questions from our star-studded roster of softball legends.

Versus gives you direct access to elite athletes and world-class coaches, who can help you improve every aspect of your game.

Whether it’s mindset advice, game strategy, technical instruction, or training information—we’ve got you covered. All at an affordable price, on an intuitive app you can access anywhere.