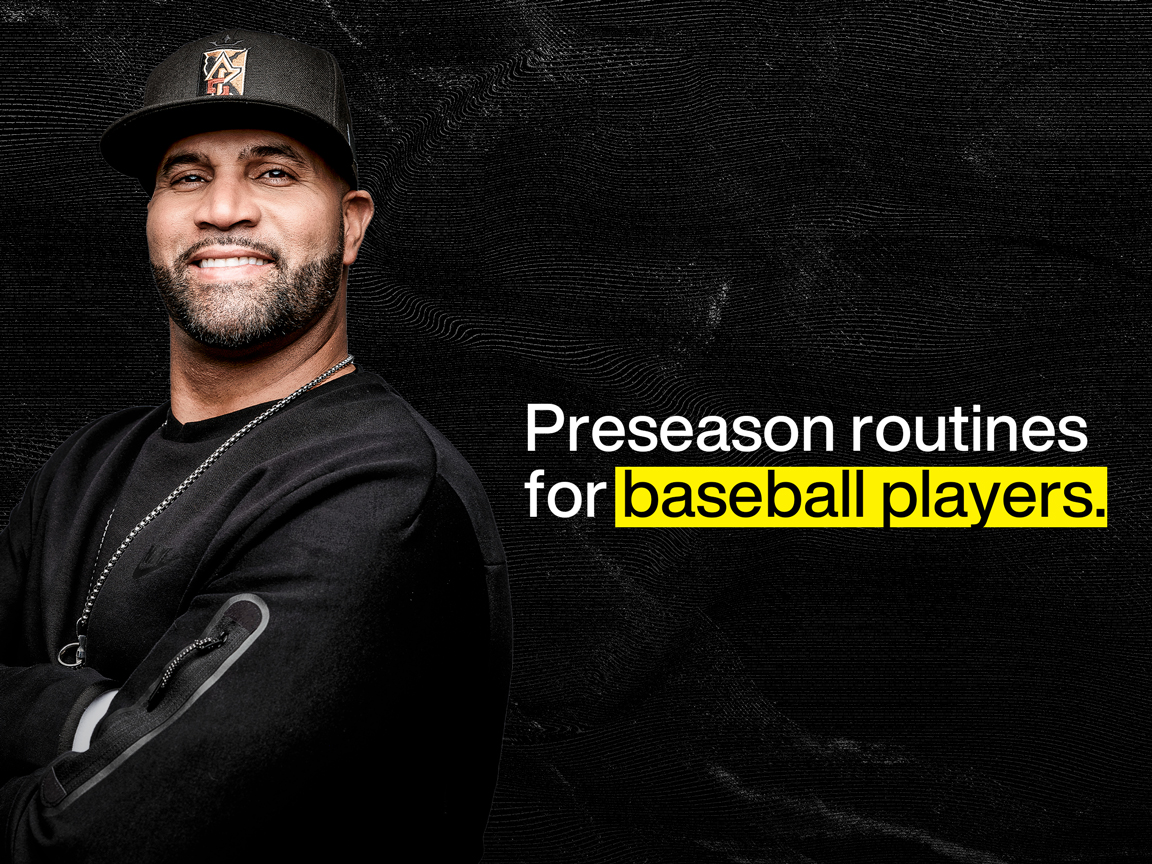 Albert “The Machine” Pujols takes us through his routines for a successful season.

To stay healthy and competitive for 162 games, players must have solid pre-season routines. Peaking too early in a season can have disastrous results. No one wants to have used their best stuff early on, then not be able to deliver in key games when it really counts.Similarly, leaving your run too late can have negative consequences as well.

The players who perform best early on tend to secure spots in the starting line-up. So if you aren’t ready to show up on game one,you could miss your chance to make an impact as the season unfolds.

For a pro, the key to a pre-season routine is finding the right balance between being ready to compete for game one, and having enough left in the tank to go hard for the full 26 ½ week season.

The best way to achieve this will vary between players. Age, position, years of competition, injury history, and several other factors play a role.But some general principles that apply to everyone.

And to take us through these—we’ve got none other than MLB legend, Albert “The Machine” Pujols—to share his wisdom on pre-season routines for baseball.

A Lesson in Long-Term Success

Albert Pujols is an ideal role model for any player aiming for long-term success in professional baseball.He’s racked up a whopping 22 seasons in the MLB. And is one of the most productive hitters in the history of the sport.

With several top-10 rankings in all-time lists, such as:

Pujols is widely considered to have his spot in the Hall of Fame locked in, and over 700 home runs and counting seems to be ample proof.

Whether he retires after the 2022 season as predicted or not, one thing’s for sure: Albert Pujols knows a thing or two about pre-season routines for baseball.

We recently asked Albert to share his tips on routines in an exclusive video interview.

The full video can be accessed by signing up for any of our plans. But we don’t want anyone to miss out—so we’ve covered the main points from the interview below.

Prep Starts in the Off-Season

“For me, my routine starts in the off-season,” states Pujols.

He hits the weight room three or four times a week throughout the offseason. And does cardio on rest days from lifting.

Albert continues his strength training routine throughout the year, but backs off the intensity during spring training. This ensures he maintains his strength and fitness, without carrying any lingering fatigue into the upcoming season.

“Remember, you don’t want to be ready for tomorrow,” he states. “Opening day isn’t until March and April.”

Pace Yourself in Spring Training

Sticking with this theme of pacing yourself, Pujols describes how he spends two weeks before spring training gradually building up his swing.

In the second week, Albert continues tee work and starts to incorporate soft toss. Then, he adds in some light batting practice.

“By the end of that second week, I’m probably taking close to 100 swings,” he explains.

This whole time, Pujols is paying close attention to dialing in his hitting mechanics. Stating, “By the time I get to spring training—I’m ready to go.”

Albert reminds players that they are going to take a lot of swings over the six weeks of spring training. He recommends pacing yourself, warning that, “If you peak too soon, you’re going to be too tired by the middle of the season.”

While this routine is obviously geared toward hitters, the same principle of pacing yourself applies just as much to pitchers.

Next to peaking at the right time—staying healthy throughout the season is at the forefront of Albert’s mind in pre-season prep.

He’s had to overcome his fair share of injury related adversity. And is a big believer that, “lifting weights and sticking to your routines” is essential for injury management and prevention.

According to Pujols, “If you finish the season healthy—you’ve definitely done your job in the off-season with your workouts.”

To incorporate Albert’s advice, make sure your strength and cardio routines are maintaining and improving general physical fitness. But don’t forget to include exercises targeted at injury prevention specific to your position and injury history.

Be Willing to Adjust

Particularly for younger players, it’s essential to stay aware that routines need to be adjusted regularly.

Playing conditions change dramatically from high school to college. And even more so from college to the professional leagues. So it’s essential to plan pre-season routines with an eye to your needs as a player over the coming year.

If you suddenly find that a go-to pitch isn’t working like usual. Or you’re struggling to get results in the batter’s box. That could be a sign you need to re-evaluate your routines and make some adjustments.

Find a Routine that Works Best for You

Albert closes out the video by reminding players, “At the end of the day, you need to find your own routine and what is going to help you out to be successful.”

Are applicable to all baseball players—but they must be tailored to the individual athlete.

You can look to coaches, mentors, and other players for advice on routines. But ultimately, you must ask yourself with every change you consider, “Does this make sense for my situation?”

That takes a bit more work than getting a cookie-cutter template for a pre-season routine. But as Pujols states, “It’s on you to see how badly you want it and how much you want to get better.”

If you want to learn more about how to build a pre-season baseball routine, and how to plan like Albert Pujols, head over to Versus and check out our Game Plans. Any of our packages will get you access to his  lessons, plus tons of other training sessions, interactive content, and more.