Being a Complete Pitcher 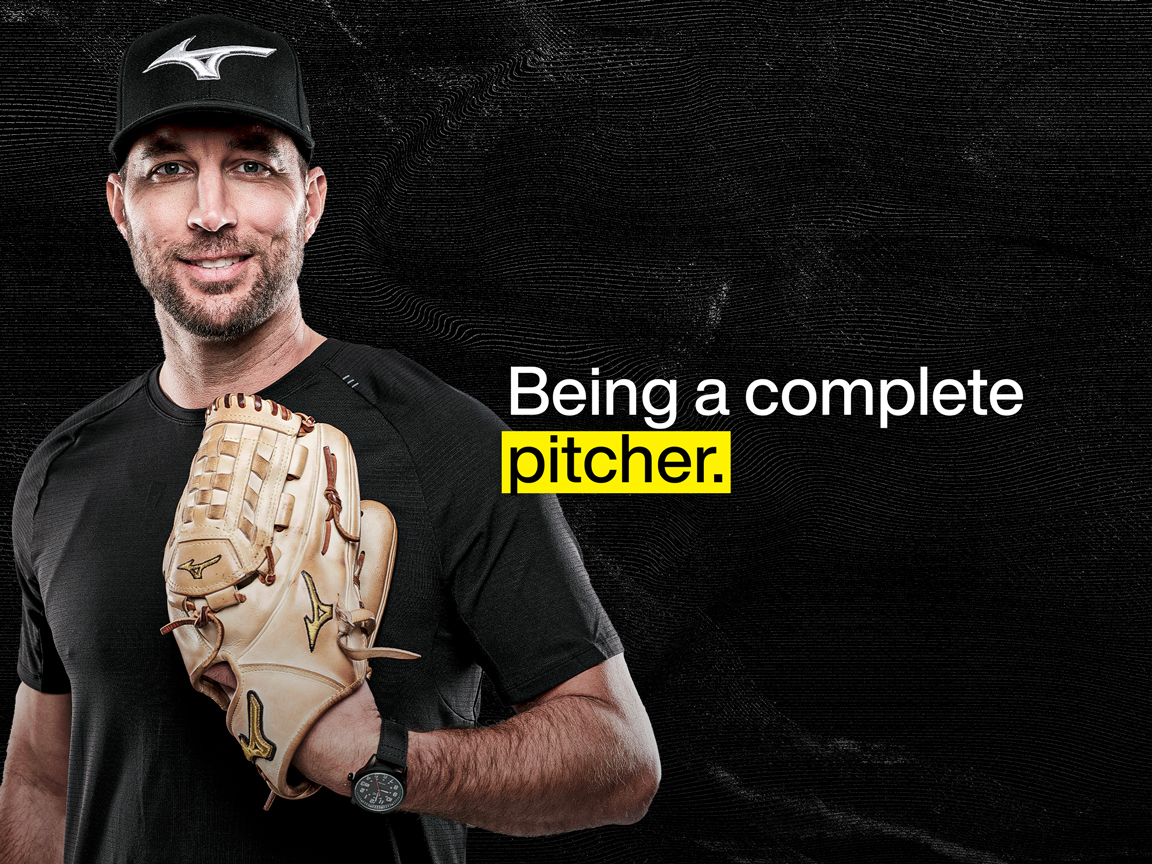 Find out how pitchers can level up their skills and stand out from the crowd.

We’ll let the star of the show, MLB legend Adam “Waino” Wainwright, explain why you need to read this article.

“There are so many more things about being a high-level pitcher than just delivering the ball to home,” he states.

Waino is a big believer that it’s the little things that set the best pitchers apart from the rest and help them rise through the ranks.

So much so that he’s got a name for this type of player: A Complete Pitcher.

According to Wainwright, a complete pitcher is an athlete who—in addition to mastering the technical aspects of pitching—has also finely tuned all other aspects of competition.

It’s the things like performing well even when you’re not feeling your best. Using body language to get a mental edge over hitters. Controlling the pace of the game. And finding a way to throw at full capacity in less than ideal conditions. That moves a player from being a good pitcher, to a great pitcher.

The good news is, any athlete can start developing these skills.

After all, most relate to mindset techniques that can be learned by anyone. They are not hardwired physical talents you either have or you don’t.

But you’re going to need some help from someone along the way.

Someone who has mastered everything there is to know about being a complete pitcher at the highest level—and is willing to share what they’ve learned.

A Blueprint for Excellence

Adam Wainwright is undoubtedly one of the most successful MLB pitchers of all time.

He’s been playing professional baseball for over two decades now and has won more than 150 games.

Adam has led the league in games started, wins, and innings pitched several times. He’s still performing at an astoundingly high level—posting one of the best statistical seasons of his career in 2021.

At Versus, we’ve been collaborating with Waino to make his massive amount of knowledge on pitching, mindset, baseball, and life available to everyone.

If you’re just starting with this article, please make sure to check out some of the others afterward. Wainwright has been generously outlining a blueprint for success that any pitcher can use to level up.

This article is based on an exclusive video training session Adam produced with Versus.

We’ll outline the main points from the session in a moment—but to see everything Waino is sharing—go to the Versus website or download the app and sign up.

Our free plan gives you access to one video session of your choice. While the standard and premium options come with the full library of video content from our star-studded roster.

With any of our plans, you can utilize our advanced AI-powered technology to ask interactive questions from our team. Just imagine, being able to ask Waino how to get more heat on your fastball right in the middle of your bullpen session. Or getting hitting advice from Albert Pujols the morning of a big game.

Versus has everything you need to get the most from your unique sporting potential—all on an easy to use digital platform you can access anywhere.

But now, let's get back to Adam Wainwright and his guide to becoming a complete pitcher.

Waino opens the video with the following statement:

“You know what I love about pitching? The one-on-one aspect of the hitter and the pitcher. I love trying to figure out what he’s thinking. What his weaknesses are. And that competition exists between just you and him. Even though there are 50 thousand people watching in the stands and millions of people watching on TV—it’s just the hitter and the pitcher.”

It’s easy to be a fierce competitor when you feel great. But Adam reminds us that as a pitcher, “there’s going to be days, most days actually, when you go out there to pitch without your best stuff.”

Your arm might be sore. You might not have your curveball. You might be distracted after an argument with someone before the game. Or feeling under the weather after a bad night's sleep.

Whatever the situation, a complete pitcher figures out a way to compete even when they aren’t feeling their best. They know the days when they feel 100% don’t come along often. And it’s the days in between that make or break a pitcher’s career.

Waino’s advice on staying competitive is to treat every day as an opportunity to do something different. “Curveball isn’t working?” he asks, “Well you’ve still got a fastball, slider, or change up.”

Before closing out this section, Adam reminds us that competition is the main ingredient for success in any sport. And “When you stop competing—you stop winning.”

Confident body language is a superpower for pitchers.

In Wainwright’s words, “The hitters should never know what you’re thinking on the mound. You have to stay confident. And you have to exude that confidence—so the hitter can feel it.”

Like competing, this one is easy to do when things are going well. But inevitably, every pitcher is going to give up runs at some point. And that’s where the true test for body language comes in.

According to Waino, the keys to maintaining positive body language are:

If this sounds impossible, he’s got a secret: It’s ok to fake it till you make it.

It’s ok to get a little internally caught up when you give up runs. But when you do—focus all your mental energy on staying confident and exuding the right body language.

Focusing on executing good pitches and staying confident draws attention away from any errors or runs you just gave up. This gives you the best chance of getting an out. At this point, your confidence will naturally bounce back.

Be a Good Teammate

One of the keys to being a good teammate is remembering that it’s not your job to worry about what you can’t control. “Your job is to make pitches, control the running game, and make the plays that come to you,” Adam explains.

When the fielders behind you don’t make a play, you can’t sit there, pout on the mound and throw your hat or glove. “That bad body language portrays to your whole team,” states Wainwright.

Two ways the pitcher can positively influence the outfield, are working quickly to keep fielders on their toes and taking the initiative to build your teammates up.

When a teammate makes a nice play—be sure to acknowledge it.

Even if they don’t make the play, some words of encouragement, like, “Hey, you’re going to get it next time,” is still the best approach.

“Those guys behind you are very, very important, Adam reminds us. “You want them fighting for you and on your side.”

Excuses and confidence are negatively correlated: The more you have of one, the less you have of the other.

We’ve already talked a bit about confidence, so now it’s time to look at excuses.

“When you play baseball, you’re going to play on a lot of different surfaces,” states Waino. “Sometimes the clay will be really good. Other times it will be bad. Sometimes there’s going to be a hole right where you always stand or land.”

But whether that becomes a reason not to compete has nothing to do with the condition of the field—it’s all about your mindset.

“A mound is not a good reason to have a bad game, unless you think it is,” warns Wainwright. “So a big part of pitching and having success at any level, is putting those excuses out of your brain and learning how to find a way no matter what situation you’re placed in.”

Next time you find yourself building up to an excuse, try shifting your attention to exuding confidence to everyone on the field. Lean into this focus enough, and you’ll likely find it’s impossible to hold onto your excuse much longer.

There are going to be days where the umpire has a really tight zone. This can be frustrating as a pitcher, so it’s important to learn how to talk to umpires respectfully.

If you feel the need to talk to an umpire, remember that they are people too. And in Waino’s words, “some of them can be really short-tempered and sensitive.”

If you want to question a call, respectfully go up and ask something along the lines of, “Did you have that up or down?”.

Adam’s advice is that you can tell them what you thought. For example, “I thought that was outside, but I’ll take a closer look at it.” Although he cautions, “You have to pick and choose the right spots.”

And for younger players, Wainwright says “probably what you should do is just tell them thank you and move on.”

Aside from being the right thing to do—there are strategic benefits that can come from staying respectful with umpires.

“A big part of pitching is controlling the tempo and the pace of the game,” states Waino.

In his experience, “It’s the pitchers who lose focus and let the game start slipping away from them who give up two, three, and four runs a lot. They’re giving up crooked numbers because they can’t slow the game down.”

If things are speeding up and you’re starting to lose control, Adam suggests you should, “Step off. Take deep, slow breaths. Really focus on your breathing. And be mindful of slowing things down.”

You might want to have a mantra you repeat to yourself at this time, like, “Control the pace, control the game.”

Then, step back onto the mound. Keep your mind focused on controlling your breathing and making good quality pitches. And be sure to keep control of the pace from then on—even after you get the next hitter out.

To wrap up, Waino gives a simple yet effective mindset tip that can be applied at any point in the game.

“Remember, as a pitcher—you always have the advantage.”

“The hardest thing in sport is to hit a baseball”, Adam reminds us. “And you, the pitcher, dictate the pace of the game. You are the one that has the ball and the play can’t start until you throw it.”

A level-headed pitcher who works fast and exudes confidence keeps hitters on the defensive and throws more strikes.

But the pitcher’s advantage can be lost.

If you let the other side get into your head. Give yourself an excuse not to compete. Show negative body language. Or let the pace of the game get away from you. Roles are reversed and the pitcher ends up on the defensive.

The way a complete pitcher stands out from the crowd—is when (not if) this happens—they dig into their toolbox of strategies and regain the advantage.

Here’s a summary of the strategies we covered in this article:

Are you ready to get better?

Remember, this article is just a sneak peek of what’s available at Versus.

By signing up for any of our plans, you can access Adam Wainwright’s full video on becoming a complete pitcher.

Our standard and premium plans include Waino’s entire pitching program. Plus exclusive videos on mindset tips, warm-ups, leadership, injury prevention, and much more.

If you’re looking for expert advice and mentoring from a team of elite athletes and world-class coaches—Versus has you covered.

We’ve included everything you need at an affordable price, all on an easy to use digital platform accessible anywhere.