Guide to Working Hitters as a Pitcher 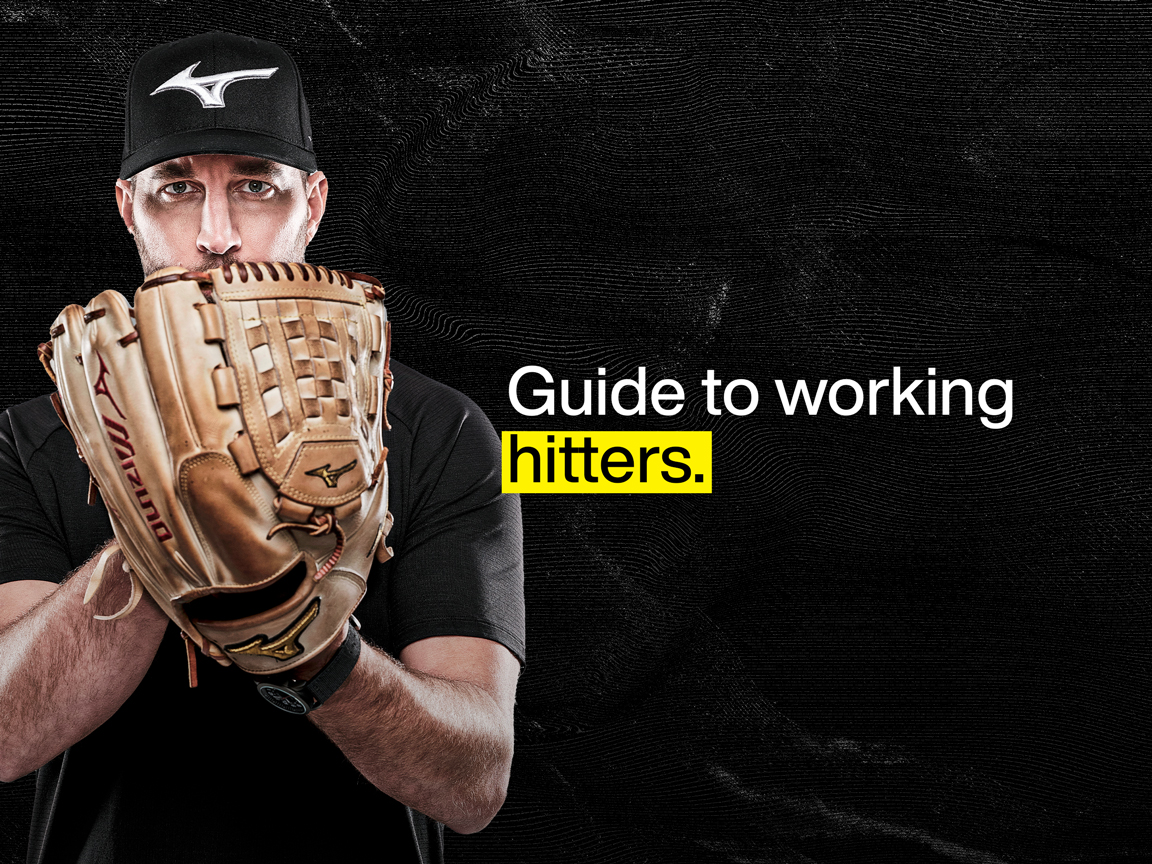 9 powerful strategies to keep batters guessing and get more outs.

Success as a pitcher is as much about strategy as it is making good pitches.

Unless you can keep high-level hitters on the defensive and second-guessing themselves—you’re going to struggle with giving up runs and be unable to dictate the pace of the game.

Physical and technical ability as a player is essential. But the best pitchers recognize that baseball and softball share as many characteristics with chess as they do athletic competitions.

Pitchers and hitters are engaged in an intricate dance of moves and countermoves. And it’s usually the one who outmaneuvers—rather than overpowers the other—who comes out on top.

As a general rule, the higher level of competition, the greater the degree of strategy required.

So it makes sense that to learn this complex aspect of the game—you’ll need to consult with an expert.

Adam “Waino” Wainwright has been going head-to-head with the best hitters in professional baseball for more than 20 years now.

He’s an expert technician when it comes to the mechanics of pitching. And he’s also a master of strategy.

For Wainwright, strategy isn’t just crucial to his success as a pitcher—it’s one of the more enjoyable parts of the game. “That’s the part about pitching that I really like,” he states. “It’s that chess game. It’s the cat and mouse.”

This attention to strategy has paid off, with Waino consistently being one of the most dominant pitchers in the league throughout his career.

Just some of his notable achievements include:

Adam has been generously sharing his vast experience in pitching, baseball, mindset, and life with Versus.

We’ve recorded a series of exclusive video training sessions with Wainwright and are making this content available in various formats across our platform.

The session we’re covering today includes strategies on how to work hitters.

We’ll outline the main points from the video in this article. But to learn everything Waino has to say on this topic—head over to our Game Plans or download the app to sign up.

Any plan will give you access to the full session this article is based on. And our standard and premium options come with the entire video library of content from our roster of elite athletes and world-class coaches.

Just imagine, getting tips from Waino about strategy the night before a big game. Or having access to hitting advice from Albert Pujols when you’re going through a slump.

Versus has everything you need to get the most from your unique sporting potential—all on an easy to use digital platform you can access anywhere.

But now, let’s go through Adam Wainwright's 9 top tips for working hitters and getting more outs.

“One of the most important things about being a pitcher is staying in good counts,” states Wainwright.

He explains that, “Batting averages on 0-0 counts in the big leagues are insanely low when the first pitch is a strike.” So it’s important for pitchers to work quickly, efficiently, and “pound the strike zone.”

Getting strike one immediately puts the hitter on the defensive, which is your number one aim as a pitcher. Because when you prove to the hitter that you’re on the attack—you stay in control of the play.

Adam’s number one tip for getting the first strike early is simple: “Throw good quality pitches for strikes.”

We’re going to dig into some of his more advanced advice in a minute. But it’s worth always keeping in mind that the basics of pitching are usually where games are won and lost.

As Waino reminds us, “Hitters can’t get out unless you throw the ball over the plate.”

In the article on Being a Complete Pitcher, Wainwright stresses the importance of recognizing that there are a lot of days you will be pitching without your best stuff.

In that session, he reminded players that if they go out one day and are missing one of their main pitches, it’s best to utilize other pitches and view this as “an opportunity to try something different.”

But if the opposing team realizes you’ve lost your curveball, for example—that puts you at a big disadvantage. To keep batters guessing, “You still need to show it,” explains Wainwright. “They still need to know that you’re not afraid to throw it.”

Adam’s advice for this situation is to pick the right hitter to throw the pitch you’re struggling with.

“If a hitter comes up and he’s a terrible breaking ball hitter, maybe that’s the guy you try to get it back on,” he suggests. “Flip it in there. Get it back for a strike. And you can get a bit more confidence going forward.”

This is where Waino reveals just how much thought he puts into strategy.

In the video, he gets fired up while running through examples of intentionally giving hitters the exact pitch they’re looking for—but with enough of a twist to catch them off guard.

For example, if he’s facing a team of aggressive hitters who chase off the plate a bit more. Adam might give them the fastball they’re looking for, but will “take it off the plate just a little bit more to use their aggressiveness against them.”

Similarly, if he’s facing a batter with two strikes who he knows wants a curveball. Waino might give it to him—but makes sure to bounce it to increase the chance of a swing and miss.

While he doesn’t always utilize this strategy, Wainwright shows how in the right situation, attacking hitters head-on can destroy their confidence.

The Importance of Off Speed Pitching

Keeping hitters off balance should be one of your main priorities as a pitcher.

Adam covered how to do this by changing the locations of pitches in the previous tip. But another strategy he suggests is off speed pitching. He does this by regularly switching between slow, medium, and fast speeds.

“If a hitter knows that you’re throwing a fastball, he’s going to gear up and have a really good chance to hit it,” states Waino.

“Guys throwing 100 miles per hour still get rocked,” he explains, “so you have to make sure you’re changing speeds as well as locations.”

Changing speeds is all about ensuring the hitter can never be 100% confident that they know what’s coming.

“If there’s the slightest doubt in the back of his mind that you might throw something else, they’re going to have a harder time centering up,” states Wainwright.

According to Adam, “if a hitter yanks the ball foul, down pull side—you know he’s really looking out over the plate and you can pound him in very easily.”

And the reverse is also true.

If a batter hits a ball foul down the right field line, you’ve got a good indication of where to place the ball for your next pitch.

Wainwright's advice is to read foul balls to strategically get the hitter's eyes looking “anywhere else besides the middle of the plate.”

“You can learn a lot from a hitter’s body language as well,” explains Adam.

In particular, “They’re usually going to tell you if they feel like they missed their best pitch,” he states.

A hitter might try to cover it up. But if you pay attention—you can tell when they took a really good swing at a pitch and are upset.

When this happens, it’s best not to give them that pitch again right away. They’ve just told you that’s what they want to hit and are likely to knock it out of the park if you do.

Same goes for if an umpire calls a strike on a pitch that they didn’t like.

If the hitter gets up in arms about a call, that’s a good indication of what the hitter doesn't want you to throw. “And you can exploit that for the rest of the game,” suggests Wainwright.

Waino admits that he’s more “old school” when it comes to analytics, but he has started to appreciate it more in recent years.

In the video, Adam explains how with the help of an assistant pitching coach, he recently managed to fine-tune his changeup to get a lot more use out of this previously underutilized pitch.

At the coach’s suggestion, they used analytics to determine the exact hand angle and spin axis of his best change ups. Wainwright then worked on replicating that pitch as closely as possible in practice.

When he was confident with it, Waino started using the new change up in game and had good results.

“I started to use my change up almost 10% of the time, which was a huge jump for me,” he explains. Prior to that, change up was a pitch Adam used sparingly—maybe only 2% of the time.

Wainwright’s verdict on analytics: “I do think those numbers can help you dig deeper into how you could be more successful as a pitcher.”

Firstly, he wants to know about their recent performance. More specifically, “if they’re hot, cold, or somewhere in between.”

“If a hitter is really riding a hot streak,” explains Wainwright, “maybe you have to pitch to them a little differently than when they’re struggling.”

“The film really helps me,” he states. “I can break it down super slow-mo and really read a hitter’s swing mechanics easily.”

Before going into a game, he states, “I want to know where a guy’s power is and where his big hole is.”

Always Learn from the Game

Waino’s final tip is something that will improve every area of your game, not just working hitters.

Adam suggests that any time you are watching a game. Whether on TV, in the stadium, or on the bench. You should be focused on key insights and take aways you can use to get better.

If you’re watching with a teammate or someone else, start a dialogue about things like what the pitcher might be thinking or planning to do next.

Try to read the hitter’s body language and see if the pitcher is adapting their play accordingly.

Pay attention to the pace and tempo of the pitcher. Is it speeding up, slowing down, or staying consistent?

If you’re watching alone that’s fine. Just make sure to stay engaged in the game and be on the lookout for anything you can learn.

“You can learn the game of baseball on a much deeper level when you’re paying attention to the game itself,” Wainwright explains.

Successful pitchers know how to work hitters to keep them off balance, on the defensive, and second guessing themselves.

It requires intense focus. Deep thinking. And a large toolbox of strategies that can be adapted to the dynamic situations that arise in a game.

To help you improve your skills in working hitters—we asked MLB legend Adam Wainwright to share his top tips on this topic in an exclusive video interview.

We’ve outlined the main points from the video in this article—but to get the full run down straight from Waino himself—head over to our Game Plans or download the app to sign up.

Are you ready to get better?

Any plan gives you access to the full training session this article is based on. And our standard and premium options come with the entire video library of content from our roster of elite athletes and world-class coaches.

Versus makes high-level sporting advice and mentorship available on an affordable, easy to use digital platform that can be accessed anywhere.