How to Master Aerial Control for Soccer 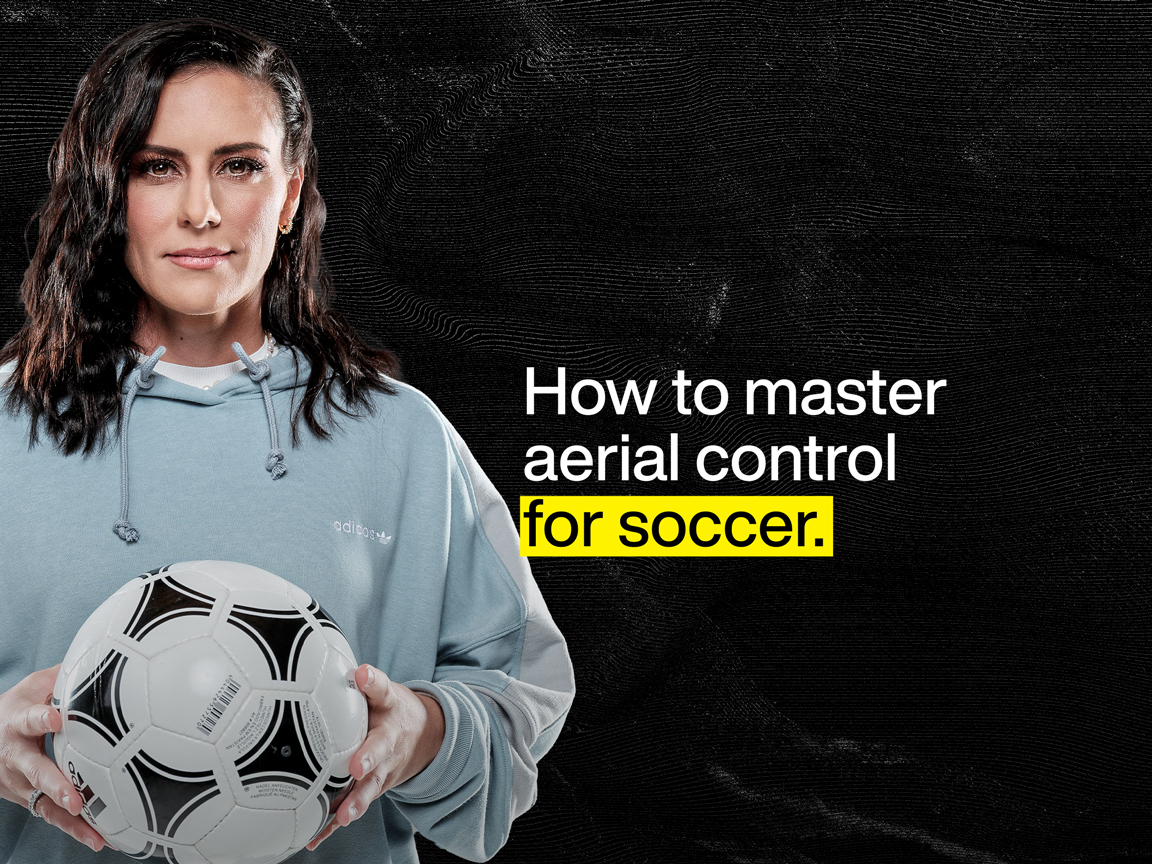 2x World Cup winner, Ali Krieger, covers everything you need to know to improve your aerial ball control in soccer

Aerial control is an essential skill for all soccer players. Yet it is often overlooked, with disastrous in game consequences.

Shortcomings in aerial control might not be obvious in practice. But in game—they show up as a glaring hole in a player's skills.

A soccer player with poor aerial control will lose possession when receiving airborne passes. They will miss opportunities for a shot at goal when set up with a nice cross. And they won’t be able to win control of the ball on a throw in.

No matter how advanced the rest of your skills are, being good at aerial control is essential to success in high-level soccer.

But the challenge is—aerial control involves several complex skills that are difficult to master.

To improve aerial control, the player must know how to read the depth and speed of an incoming ball. Then be able to move into the right position to receive it. And finally, understand how to use the ideal part of the body to take control of the ball and bring it to the ground.

This is challenging stuff. And to get better, you’re going to need solid instructions and intelligent drills.

If you want to access Krieger’s full video session on aerial control, all you need to do is choose a plan and download the Versus app.

A Comprehensive System for Success

At Versus, we’ve been working with some of the biggest names in U.S. soccer to develop a comprehensive training system for success.

We’ve got exclusive videos from legendary players like Kelly O’Hara, Ali Krieger, and Ashlyn Harris. On the coaching side, internationally recognized leader in individual technical development, David Copeland-Smith, covers everything soccer players need to know about mindset and skills training.

Just some of the areas covered by our star-studded roster include:

Krieger has been a dominant force in U.S. and international soccer for almost two decades. She started in all seven matches of the championship winning team in the 2015 FIFA Women’s World Cup. Then played a pivotal role in the team taking out first place again in 2019, earning her 100th international cap in the process.

Beyond Ali’s video, our free subscription gives you access to one training video of your choice. While the standard and premium options include unlimited access to video sessions from our roster of elite athletes and world-class coaches.

All plans also let you utilize our conversational AI-based technology. Through the Versus app, you can ask questions from our whole team on any aspect of training, mindset, and skill development. Just our soccer roster alone has answers to over 800 questions, spanning more than 30 topics.

But now, let's take a look at how you can become a master of aerial control in soccer.

The Fundamentals of Aerial Control

Like most areas of soccer, being good at aerial control requires an athlete to have command of several different skills. “You have to understand how to move forward, back, and side to side—while also having good judgment of where the ball is in the air,” states Ali.

A perfectly-timed jump is often required to win possession when the ball is airborne, “So you’ll need to be able to read the depth of a pass in order to attack the ball,” Krieger explains.

And it’s not just the ball you need to attack.

In most cases, you will be head-to-head against an opponent who is also trying to win control. “You must have the courage and bravery to get up and win the ball against your opponent,” urges Krieger. “To dominate them in the air.”

Ali’s motto when it comes to aerial control is, “Attack the ball—don’t let the ball attack you.”

Let’s go through the fundamental skills of how Krieger teaches soccer players to put this motto into practice.

“As the ball is served, you need to have a good understanding of what spaces you’re in,” states Krieger.

To get in optimum position, a player must read the speed and depth of the ball. Judge where it is going to land. Be aware of your opponent's position. Then make a fast decision about where to move to be in the best position to gain control.

“The ball isn’t necessarily coming from a back line or midfielder,” Ali reminds us. “Services are also coming from crosses and set pieces. So you have to have good depth perception and judgment.”

While you’re working to get into the best position for aerial control, you’ll also need to pay close attention to timing.

Timing is an area many players struggle in with aerial control.In many cases, you will be timing a jump or a quick cut away from your defender to win possession.

“You have to figure out ways to get that little separation and not create a foul,” states Ali. Sometimes you have to bump them a little bit. And unless this is timed perfectly—there’s a good chance you will lose the ball.”

“For me to dominate my opponents in the air,” explains Krieger, “I really work on focusing on timing and the ability to jump higher than my opponent.”

Good timing starts with spatial awareness and judgment. Then, you must confidently execute your move to beat your opponent to the ball.

“Having confidence in your timing to attack the ball at the right time is huge in the success of aerial control,” states Ali.

“You have to be strong,” she urges. “And be confident that you’re always going to win it.”

This confidence comes from two areas—adaptability and practice.

We’ll go through adaptability now, before moving onto a drill to practice the skills involved in aerial control.

To confidently contest for aerial control, soccer players must have faith in their ability to utilize the best approach for any situation.

We’ve already covered the importance of knowing that you can execute a well-timed jump, or a cut away from your opponent. But you’ll also need to have the skill to use any part of your body to bring the ball to the ground.

You’ll only get a split second to make your move in a game. So ensure that you have practiced controlling the ball from all parts of the body until it is second nature. Otherwise, you’ll risk hesitation—and miss your chance when it counts most.

All you need to set up is a small space, four cones, and a training partner.

Stand in the middle of the cones—then your partner is going to serve a ball in.

You’ll bring the ball outside of the cones and play it back to them to reset.

“The goal is to have a good first touch using different parts of your body,” states Krieger.

Here’s the drill broken down into four steps:

As you get more confident with the drill, your partner can move back further.

You can also adjust the distance of the cones. Switch to kicking the ball instead of throwing. And practice receiving the ball at varying heights and speeds.

In a typical practice session, run through 3 - 5 sets of 15 touches, resting for 15 seconds between each set.

Remember: practice receiving the ball with different parts of the body. This is one of the main ways you will develop the adaptability and confidence to win aerial control in a game.

After all, the vast majority of the game is played with the ball on the ground. So it makes sense that most of soccer practice is focused on this area.

But athletes who don’t put the time in to master aerial control are drastically reducing their ability to perform in game.

For players of any position, there are pivotal in game moments where success depends on well developed aerial control skills. And the player who has done the work in practice always comes out on top.

No one wants to be responsible for fumbling a shot at goal. Losing control of a teammate’s pass. Or being the weak link in a set piece.

But if you don’t do the work on aerial control—that’s exactly where you’ll end up.

“You really need repetition to master aerial control on the field,” explains Krieger. “But that’s along with everything else you do in soccer.”

If you want to learn more about improving aerial control in soccer, how to develop your mental game, and bouncing back from injury, head over to Versus and check out our Game Plans. Any of our packages will get you access to our lessons, plus tons of other training sessions, interactive content, and more.