Adding to the Arsenal with the Dropball & Changeup 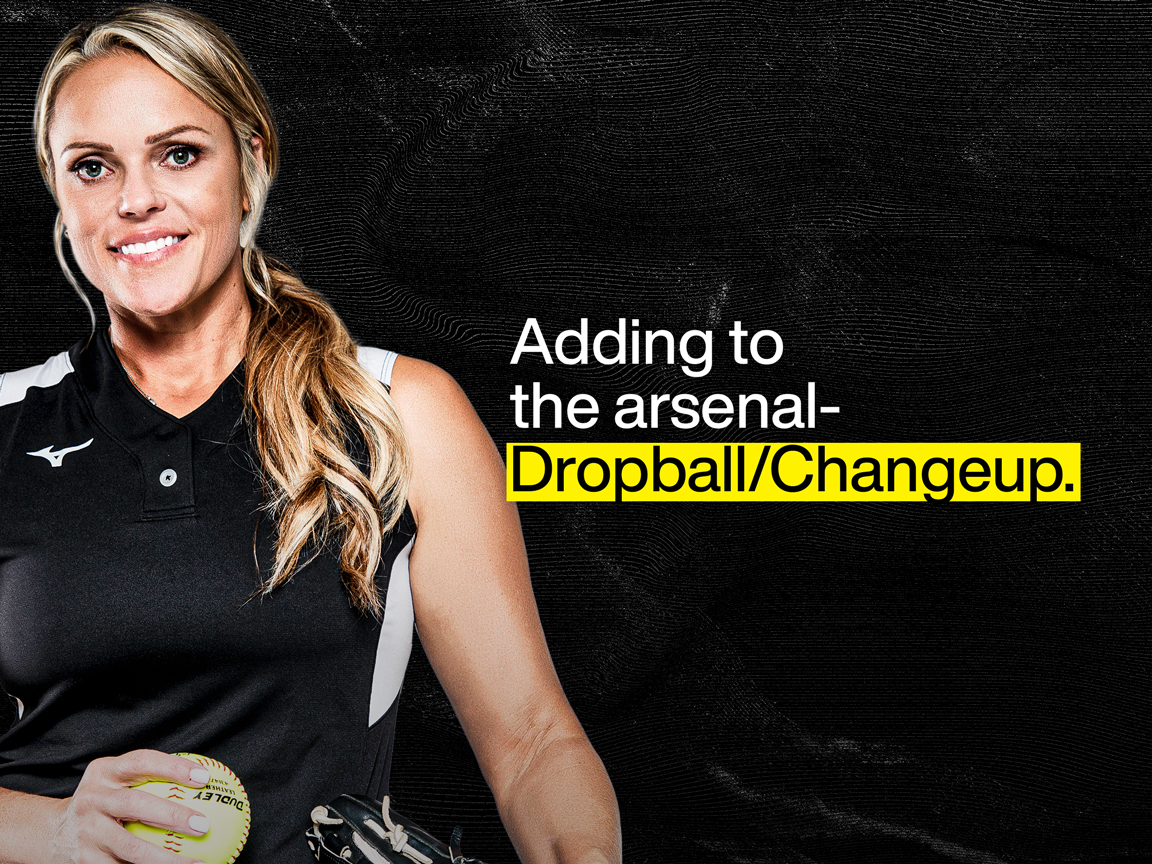 Jennie Finch breaks down two pitches that every softball player must learn how to throw.

If you’re comfortable with the fastball and aren’t sure what pitch to tackle next—this article is for you.

Being able to throw a good dropball and changeup is a massive asset for any softball pitcher.

With these pitches in your arsenal, you can easily set up your teammates to deal with runners on base. Plus, you’ll always keep hitters second guessing themselves about the speed of your next pitch.

If you throw a dropball with runners on second or third and the hitter makes contact—it will likely result in a ground ball. This allows you or your fielders to quickly regain control and deal with the runners before they reach home.

Additionally, if you can change up the speed of your pitches without giving it away to the hitter—batters will constantly be off balance. They’ll be forever wondering if your next throw will be fast, slow, or somewhere in between.

But there’s a catch.

When a dropball or changeup is executed poorly—a pitcher usually gives up easy runs.

To make sure you get the knowledge needed to master these two essential pitches, we asked softball legend, Jennie Finch, to cover everything you need to know.

Jennie Finch, aka “The Queen of Consistency”, has an impressive track record of outplaying her opponents in the highest levels of professional softball.

In 2004, Finch took to the international stage, helping the United States win gold in the Athens Olympics, followed by silver in 2008.

The Queen of Consistency was a force to be reckoned with in the National Pro Fastpitch (NPF) softball league. She was named co-pitcher of the year for the Chicago Bandits in 2005. She set the NPF’s season ERA record of 0.11 in 2007 (still standing). And had multiple perfect games, no-hitters, and extended winning streaks.

Finch remains heavily involved in softball and is a passionate advocate for female athletes. She runs training camps across the U.S. and has her own softball academy in Flemington, New Jersey.

This article is just one part of a softball pitching course Jennie has produced with Versus, covering topics such as:

She even addresses essential mindset topics, like How to Battle Fear and Anxiety. And of course—How to Build Consistency.

Each of these articles summarizes a full video training session that can be accessed through a subscription to Versus.

Our free plan includes one video session. While the standard and premium subscriptions give you access to the entire library of videos from our roster of elite athletes and world-class coaches.

All Versus plans enable you to ask interactive questions from your favorite athletes—made possible with our advanced AI-powered technology.

Just imagine, struggling to dial in your changeup and being able to get advice straight from Jennie Finch. Or discussing hitting fundamentals with one of the best players in softball right now, Amanda Lorenz.

If you are ready to get better, Versus has everything you need at an affordable price, all on an easy to use digital platform accessible everywhere.

Now, it’s time to dive into Jennie Finch’s advice on how to add the dropball and changeup to your arsenal of pitches.

The dropball is a pitch that flies straight toward the hitter, then at the last moment cuts down sharply towards the ground.

It can be thrown to get an out on the batter. But as the pitch often leads to a ground ball when hit, it can be used strategically to deal with runners on base.

The dropball is usually the first pitch softball players learn after a fastball. Because, as Finch explains—“throwing your fastball with a super spin becomes your dropball.”

“I grip it just like my screwball, my fastball, and my changeup,” states Jennie.

Here she is demonstrating the four seam grip with her fingertips along the bottom part of the ‘C’.

To create the required forward spin on a dropball, Finch stresses the importance of “really feeling the three middle fingers on the seam.”

As you throw, you will be using all of the muscles in your fingertips, wrist, and forearm to try to “pull off the seams from behind the ball.” This pulling, or peeling motion, is why you hear some people use the term “peel dropball.”

The goal is to have “strong, strong fingertips, trying to get that ball to spin over the top as tight as we can,” states Jennie.

“Don’t just throw a dropball,” urges Jennie. “Make sure you’re hitting your spots and throwing your dropball inside and outside.”

The secret to consistently hitting your intended location—is to adjust ball direction with your stride—not your throw.

“We always want our mechanics to be the same, within those three footprints of your powerline,” recommends Finch (giving away one of the secrets to her unrivaled pitching consistency).

Jennie mentions that some players find shortening their stride “just a tad” can help in really getting behind and on top of the ball. “Just don’t make it obvious to the hitter,” she cautions.

“The whole point of the changeup is to look like your fast stuff, but it’s slower,” states Jennie.

Changing pitching speeds in softball is just as important as varying locations and utilizing breaking pitches: So long as the hitter can’t tell what’s coming.

If a batter has to constantly guess what speed your next pitch will be, you will always stay one step ahead by keeping them off balance.

The problem is, you can’t just slow your arm circle or cut it short—“that’s obvious to the hitter,” states Finch. “We want it to fly by that hip, just like our other pitches that are hard.”

How do you do that?

“The trick is to come through with the hand backward,” explains Finch. With what she calls a “backward turnover change.”

Let’s start by looking at the grip for a changeup.

Using the same fastball grip as for the dropball, Jennie tucks her index finger to the side, to help take some speed off the pitch—like this.

She can also throw the changeup with her rise and curveball grip, as detailed below. So feel free to experiment with both.

If you are having trouble slowing your changeup down, you can try holding the ball more in the palm, rather than firmly in the fingertips.

Now, let's take a look at how to rotate your hand to come through backward.

“When I get to 9 o’clock—that’s when I’m starting to turn my thumb backward,” demonstrates Finch.

Here she is from another angle, explaining “so my thumb goes backward, turning my wrist”.

You want to come through to finish the pitch “showing the catcher your watch.”

Finishing with your pinkie finger up.

The fundamentals that Jennie covers in Proper Softball Pitching Mechanics all still apply. Most importantly, coming to a complete stop with a firm front side, to transfer spin to the ball.

Finch equates the technique of the changeup to spinning a quarter on a table. “You have to stop that quarter to spin it tight.”

“I’m stopping the motion and the power,” she explains. “Then getting behind it, spinning—trying to almost rip the cover off of that changeup. Ideally, I always want it to break down and away, or down and in.”

It’s very easy to give away a changeup to a hitter if you don’t conceal your body angle.

The hitter is going to have a good idea they’re getting a changeup.

To address this, Jennie recommends,

“Tuck that chin. Tuck that head. Drive through. And finish strong—just like your other pitches.”

A changeup must be released almost on the downward part of the arm circle, about here.

Releasing a changeup too high will result in a rainbow. Focusing on not letting your hand go above your waist on the follow through can be helpful.

Jennie describes the intent of the pitch as, “Shoving that ball down through the zone. Pulling the cover off and making that ball dance down in the zone, rather than up.”

Finch ends with a warning that throwing changeups repeatedly can alter your pitching mechanics. She recommends that ideally, they should be used before or after a fastball.

Using this tactic means you can really focus on having the same arm speed for both pitches—the hallmark of a good changeup.

Get Out of Your Comfort Zone

If the thought of trying out new pitches in a softball game makes you nervous—you’re not alone.

At the end of the video, Jennie recounts the story of when she first threw a changeup in a game.

She had just moved to a more competitive league. And after practicing the changeup for some time with her father—he told her, “Today, you’re going to throw a changeup in the game.”

Jennie protested that she wasn’t ready and was too nervous. But sure enough, her dad called for a changeup in the game.

“I tighten up and tense up,” recalls Finch. “Thinking about everything that I don’t want to do instead of what I do want to do. And chuck that changeup right over a 20ft backstop!”

Despite her feeling humiliated and embarrassed, Jennie’s father continued to call changeups throughout the game. Her next one was 15ft high. After that, 10ft.

“But by the end of the game—this girl was throwing changeups for a strike,” smiles Jennie. “Thanks to my mean, evil father, pushing me out of my comfort zone.

Jennie’s parting advice for learning new pitches is, “Don’t be afraid. Who cares if you mess up? Sometimes you have to go a couple of steps back to go forward. So keep pushing and persevering. You got this!”

Remember, this article is just a sneak peek of what’s available at Versus.

By signing up for any of our plans, you can access Jennie Finch’s full video on the dropball and changeup.

Our standard and premium plans include Jennie’s entire pitching program. Plus exclusive videos on mindset tips, training the next generation, developing your own personal brand, and much more.

If you’re looking for expert advice and mentoring from a team of elite athletes and world-class coaches—Versus has you covered.

We’ve included everything you need at an affordable price, all on an easy to use digital platform accessible anywhere.